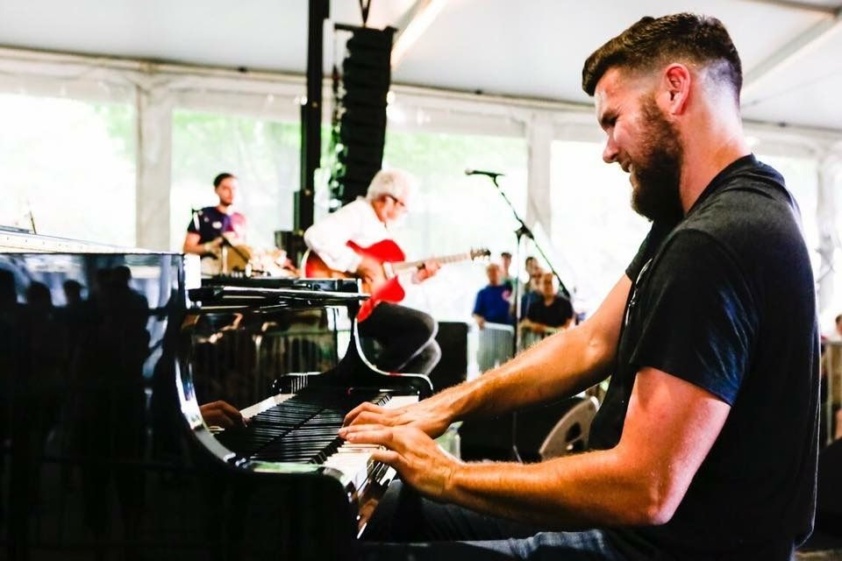 In addition to Spare Parts, Kevin is currently touring and recording with guitar virtuoso, Fareed Haque and the Flat Earth Ensemble. The quartet recently performed 2 sold out shows at the Blue Note Beijing featuring the legendary drummer, Paul Wertico. In just the last few years, the group has headlined shows across North America, China, and Canada, including the Chicago Jazz Festival, Blue Note Beijing, Green Mill, Dazzle Jazz, Savannah Jazz, Moe’s Alley, and Corazon Arts Center. In the midst of the North American tour, Kevin had the honor of performing with the legendary jazz fusion group, Garaj Mahal who headlined “Folly Fest” in New Brunswick, Canada for nearly 10,000 people. In 2017, Kevin, along with Fareed Haque, performed with the legendary jazz saxophonist, Javon Jackson as they headlined the Glen Ellyn Jazz Festival. In 2015, the group (Flat Earth Ensemble) performed with Grammy award winning Indian percussionist, Vicki Vinayakram, V. Selvaganesh and saxophonist/composer, George Brooks for the “Eye of India Festival” in Chicago. Kevin will be recording on the upcoming Fareed Haque and the Flat Earth Ensemble album which will feature an all star cast of musicians.

Kevin is currently an adjunct professor at Harold Washington College where he teaches music theory, group piano and private lessons. Outside of the college, Kevin is an active clinician around the Chicago-land area and has worked with the Illinois Music Educators Association for many years. He has given numerous master classes at some of the most highly acclaimed schools across the country. Kevin is the owner and founder of House Call Music LTD, which is a music teaching service in the Chicagoland and Denver areas that provides high quality music instruction in the comfort of your own home. House Call Music is made up of over 25 diverse musicians and educators and more information can be found on our website.

Kevin was an endorsed Moog artist for several years and uses all vintage/ analog equipment in live performances including a Wurlitzer 200a, Fender Rhodes (Mark II), Honer Clavi C, and Moog LItte Phatty..